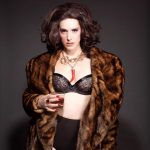 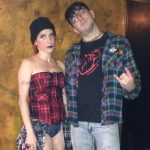 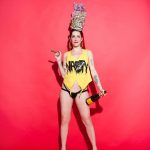 Today Matt welcomes Nasty Canasta, a burlesque producer and performer hailing from Brooklyn, NY. A producer for Wasabassco, Nasty is known by the tag line “The girl with the 44DD brain.” She was a previously a guest on the Crash Chords Podcast, Ep. #183, where she brought on Donker Mag by Die Antwoord for discussion. Today, Matt inquires into her earliest ambitions and her transition from theater to burlesque. They chat about what she looks for in other performers and the types of acts and shows she identifies with most. They chat about her most recent Wasabassco show “Unstripped Mysteries” (a tribute to the show Unsolved Mysteries), as well as her costuming skills and what goes into creating outfits. And so, from Nasty’s future as a producer to the future of burlesque as a whole, here’s presenting Matt Storm and Nasty Canasta.

An in-depth conversation about burlesque, being a naked lady online, not feeding the trolls, rock music and acclimating to NYC with Sydni Deveraux.

Stay Up to Date with Sydni Deveraux

(You can listen and subscribe to the podcast on Apple Podcasts, Subscribe on Android, iHeart Radio, Mixcloud, TuneIn, Stitcher, PodBean, PlayerFM, Google Play or listen via the media player above.)

This episode is sponsored by Gorilla Coffee.

I sit down with Corvette to discuss a rainbow of things:

– our past in Viewpoints, and Waldorf education

– how she feels she is first and foremost a performer, then an actor

-Being a member of The Bats at the Flea Theater, as well as an apprentice for the Williamstown Theater Festival

-the influence of RuPaul and later Drag Race on her

I sit down with Lux in her NYC apartment to discuss a range of topics including her school life, her career as a choreographer, how her parents met (spoiler, it’s amazing) and many more things such as:

– growing up in BedStuy

– going to school at UC Santa Cruz (banana slugs anyone?)

-her super cool parents…Barbara is my new hero!

– studying documentary film and her almost life as a lawyer

This interview has a slice of many parts of my father’s life so far, but does not even begin to cover all of it. I will just list moments it encapsulates…

He Stood in for a Dog in a Dog Food Commercial

His stories of the original KFC Colonel

His Radio Sketch Comedy Show with Joel Surnow(creator of 24)

I sit down over a plate of meat and cheese with the extraordinary performer Ivory Fox as we discuss her childhood in gymnastics and ballet and moving in to NYU dance school and auditions and our thoughts on musical theater and beyond.

Ivory is an uber talented performer in many arenas including theater, burlesque, circus, and beyond. She commands a stage and her recent performance art BHOF supports my statements.

Knowing your dream is one thing, but persevering no matter what is something I am most interested in and Ivory does that in spades. Come listen to our laughs and moments!

Ivory Fox is a teacher at Body and Pole in NYC

She performs regularly with Wasabassco Burlesque, at Duane Park, and was recently in the Bindlestiff Family Circus show!

A candid conversation with the multi-talented Bettina May. As an artist and activist, Bettina talks about what it is like to be a Canadian Greencard holder in this “new America”, the reason failure isn’t a bad thing, and the joys of ride sharing among a bevy of other fun and interesting topics.

Most importantly we discuss making your own art and working towards different goals. In coming weeks I am hoping to discuss more with people about what the triumphs and pitfalls of being a working artist is and what failures and successes can teach us!

If you are interested in supporting Bettina and her work, this is the link to her Patreon: https://www.patreon.com/bettinamay

The Tarantino movie we are referring to is: GrindHouse, DeathProof, Act Two

Sit back and listen to my conversation with friend of 15 years, comedy genius, Katie Hartman. Katie is a hilarious actress and comedy writer who is one half of Skinny Bitch Jesus Meeting, and also a person I met while at college at Sarah Lawrence.

We discuss our time with the fantastic Fanchon Scheier in Dramatic Imrpov during our time at SLC, as well as Katie’s hilarious yet embarrassing time dealing with the “hair down there”. This is a fun and light talk and I could not be more lucky to call Katie a friend.